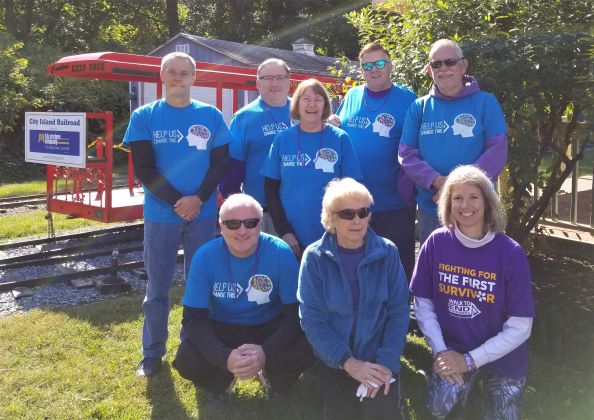 Every 65 seconds, someone in the U.S. develops Alzheimer ’s disease. 1 in 3 older adults will die with Alzheimer’s disease (Alzheimer’s Association Facts & Figures).  These figures came to mind as the staff of Keystone Elder Law P.C. participated in the Walk to End Alzheimer’s on City Island, Harrisburg, on Saturday, October 5th https://alz.org/ .

Finding frightening statistics about Alzheimer’s disease (AD) is easy. Understanding the cause, treating the symptoms, and preventing the disease has proven to be a more challenging task.

So where are we in our battle against this condition, which was first described 113 years ago?

It wasn’t until the mid-1970s that scientific and public awareness increased enough to stimulate consistent and specific research about the disease.  The 1980s brought the formation of the Alzheimer’s Association and the discovery of the two proteins which are found in the brains of those experiencing AD – beta amyloid and tau.  It remains unknown whether these proteins are a cause or symptom of the disease.

In the 1990s, the first drugs were approved specifically for the treatment of Alzheimer’s symptoms.  In 1993, the first risk factor gene (APOE-e4) was identified.  Former President Reagan’s announcement of his AD diagnosis in 1994 brought additional attention to this condition.

2003 marked the beginning of the National Institute of Aging’s genetic study and in 2012 a National Alzheimer’s Plan was released with the goal of identifying AD prevention methods by 2025.

What is happening in AD research today?  The public is most likely to learn results of studies which demonstrate the effects of medications, diet, and exercise on symptoms of the disease since these studies are usually easier to understand and involve factors related to our daily lives. Researchers are also working on a multitude of other facets of AD:

Genetics- Although the gene APOE-e4 was first identified as a risk factor years ago and is the most common gene associated with late-onset AD (after age 65), scientists are still figuring out how it works.  A recent study in Finland found that this gene decreases the effectiveness of immune cells in the brain which act as trash collectors and remove the build-up of amyloid proteins.  Genetic research has uncovered additional genes which are associated with late-onset AD, as well as 3 genes with rare variations which actually cause early-onset Alzheimer’s.

Diagnosis – Since changes in the brain begin to occur years before symptoms appear, early diagnosis of AD can have significant benefits as treatments and preventative techniques develop.  One study conducted by the National Institutes of Health (NIH) looked at particles from cells which were previously thought to be useless.  These particles were found to contain chemicals, and some of these chemicals are suspected markers for AD. This finding may allow for the development of a blood test for AD.

Research continues related to using PET imaging (positron emission tomography) and cerebrospinal fluid proteins to detect AD.  PET imaging can reveal the cell and molecular function in various areas of the brain. Testing of cerebrospinal fluid is accomplished via a spinal tap or lumbar puncture.  A specific protein is measured which shows how well immune cells in the brain clear waste products.  Although these tests currently reveal alterations in normal cell processes, these alterations are not able to specifically pinpoint Alzheimer’s disease yet.

Recent research has also looked at the eye (pupil size during brain activity) and sleep patterns as possible predictors for the development of AD.

Although it may appear slow, progress is being made in Alzheimer’s research.  The complexity of the human body and its processes leads to innumerable possibilities for disease development and progression.  Studies which identify potential causative factors and successful treatments must be able to be replicated on a significant scale for verification of the results which would allow progression to the next step of discovery.

For those experiencing Alzheimer’s disease or another form of dementia, planning for the future is possible. An important first step is to designate a Power of Attorney. Learn more: https://keystoneelderlaw.com/power-of-attorney-faq/