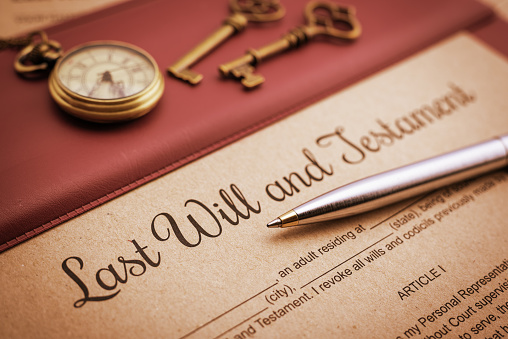 “You’re out of the Will!” is something someone might shout at a family member who they feel has wronged them in some way.

While it is unfortunate when relationships fall apart, you do have the right to disinherit a child, a parent, or a more distant relative.  You might even choose to disinherit a child from your estate because of gifts given during your lifetime.  The one person you cannot completely write out of your Will is your spouse.

Pennsylvania laws include provisions to protect spouses.  The Commonwealth does not want widows to be left penniless and reliant upon the welfare system to survive.  If a spouse is not provided for in the Will, or receives too little under the Will, that spouse has a right to claim a share of the estate called the Spousal Elective Share.

That share amounts to one third of certain property from the estate, but some assets are excluded and some must be waived if the elective share is claimed.  The Spousal Elective Share does not include insurance proceeds, certain retirement benefits, any property that was sold or given away with both spouses’ agreement, and some more complex items.  The spouse can, however, claim a share of certain property that was sold or given away without their consent.

Why might someone want to disinherit their spouse?  The most obvious circumstance is if the couple is having marital problems and is in the process of divorcing.  The legislature thought about that, and made provisions for divorcing spouses.

Tom and Katie were married for several years, and then things fell apart between them.  Tom began an affair with Sheila, and then he decided to leave Katie.  He changed the beneficiary designations on his retirement account and life insurance policies to benefit his siblings and updated his Will to disinherit Katie.  He pulled all of the money out of savings and used it to buy a house for himself and Sheila.  Katie came home one day to find their apartment and bank accounts had been cleaned out, and Tom had begun a new life with his mistress.  Katie filed for divorce, but before the divorce could be completed, Tom was in a fatal car accident.

What happens to Katie?  That depends on how far along they were in their divorce.  If the couple was still in the early stages of exchanging documents and negotiating settlement, then Katie would claim a Spousal Elective Share from Tom’s estate.  Even though Tom chose to disinherit Katie, she could receive a third of the money in his bank accounts and a third of the value of the house he bought for Sheila.

Katie could not, however, receive any of the life insurance proceeds.  Depending upon how Tom’s retirement accounts were set up, Katie may or may not be able to receive a share of those.  If grounds for divorce had been established and the court was close to dividing up their marital property, then Katie would not be able to claim an elective share from Tom’s estate.  She would, however, have the option of continuing the divorce proceedings to receive what might be a larger share of his estate than the Spousal Elective Share.

A spouse may be omitted from a Will in a healthy marriage, too, though.  Consider a different circumstance, with Robert and Linda.  Robert and Linda married later in life, after each of them had their own separate children from prior relationships.  They each sold their prior homes and used the funds to buy a house together.  Linda kept about $300,000 in separate bank accounts, $100,000 in joint bank accounts with Robert, and had a few life insurance policies benefitting her children.  Her Will left everything to her children and nothing to Robert.

What if the Elective Share would be more, though?  What if Robert had advanced dementia and his son from a previous marriage was acting for him under a Power of Attorney?  Would Robert’s son claim the Spousal Elective Share to increase Robert’s inheritance?  The couple could have done better planning to ensure their agreements would be honored.

Consider another circumstance.   George and Mabel were married for many happy years before George’s health declined.  Mabel did the best she could to care for him at home, but after the third fall, the doctor determined it was not safe for him to return home.  He needed skilled nursing care.

Mabel went through a complicated process to get George qualified for Medicaid to help pay for his care in the nursing home, while preserving as much of their combined property for Mabel to live off of for the rest of her life.  Mabel then passed away while George was still living in the nursing home.  If Mabel’s estate plans leave George less than the Spousal Elective Share, the Department of Human Services will claim the Spousal Elective Share on George’s behalf.  The kids will have to go through more work to get George eligible for Medicaid again.  If Mabel did not get the best possible legal advice, the kids might have more work and expense than was absolutely necessary.

Even in a happy marriage, there may be good reasons to limit what your spouse inherits.  Make sure you get the best possible legal advice to accomplish your goals.  Call Keystone Elder Law at 717-697-3223 to find out if an elder law attorney can help you.  You may also attend a free online planning workshop. Find more information about the workshops here: https://keystoneelderlaw.com/workshops/