When The Government Pays For Skilled Nursing Care 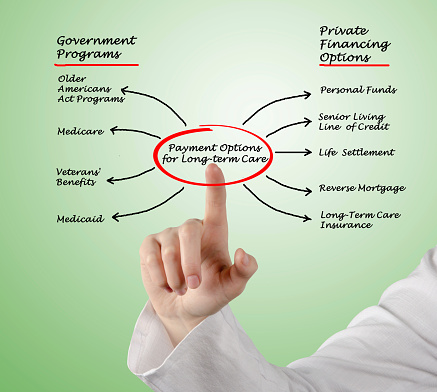 When a person begins to need long-term care because of chronic disease, injury, cognitive decline or frailty, there are usually two primary concerns. The first should be to determine what level of care is needed and how it can be obtained.  The second is to determine what financial assistance is available to pay for it.

In Pennsylvania, an application for government assistance to pay for long-term care in a licensed Skilled Nursing Home is made to the PA Department of Human Services (DHS).   The funds DHS uses are in large part funded federally by Medicaid, but labeled by DHS as Medical Assistance or MA.  Such funding is not available to pay for care in a licensed Personal Care Home or Assisted Living Residence.

One common misconception is that inferior care is provided by a skilled nursing home to a resident who receives Medicaid. Federal law ensures that is not true.  In the improbable event that a person could demonstrate that inferior care was provided to a resident who receives Medicaid in comparison to those who pay with private funds, there could be a large federal lawsuit against that institution.

DHS administers funds according to state regulations and policies, which federal law prohibits from being more restrictive to individual rights than are federal regulations. Pennsylvania law about Medical Assistance is found in Title 55 of the Pennsylvania Code.  When lawyers challenge state restrictions in federal court as being too stringent, the rulings in such cases create legal standards known as case law.

DHS has published an on-line Long-Term Care Handbook to organize the extensive laws, regulations, and policies.   Since the Medical Assistance applications are reviewed by various County Assistance Offices (CAOs) of DHS, sometimes one CAO might interpret the extensive regulations and policies differently than another.  An appeal process, to an Administrative Law Judge or the Secretary of DHS as a matter of policy or hardship, can add another layer of complexity.

It is unfortunate that, similar to the tax code, long-term care regulations are too complicated for many people, and even most lawyers, to understand. Partial understanding leads to bad advice or lost opportunity.  The basic threshold to obtain Medicaid funds for long-term care in a skilled nursing home is a three part test.

The first issue is whether an applicant for Medicaid has a medically verifiable need which requires continuously present skilled nursing care. This is verified by an attending physician, as well as a stated-funded Area Agency on Aging (AAA), which provides a check and balance.  Some persons who do not meet this medical standard may be appropriate for admission to assisted living or personal care, where Medicaid funds cannot be used to pay for care.

The second issue is whether the applicant’s gross monthly income is less than the monthly cost of care. It is important to understand that this test is about the income of only the applicant, and not the household. Since a person who medically requires skilled nursing can no longer be working actively, and it is possible to restructure passive and active income, this part of the test is nearly always manageable.

The third and most challenging issue is a requirement that an applicant has a minimal number of resources or assets.   Generally, the term “resources” refers to the value of marketable assets for which a 1099 is issued to the IRS or which are issued a title by Penn DOT.   DHS has extensive definitions and policies about what may be excluded, such as a retirement account of the spouse who does not need skilled nursing, or a business asset that is needed to produce household income.

Assume that a married couple owns a home and has $325,000 in other assets. One spouse, whose monthly income is less than the cost of care, becomes bed-ridden and requires full-time skilled nursing care.    If this were your situation, you might wonder when and how you could qualify for Medicaid.

The answer to this question is complicated and not what it might seem to be on the surface, since there are many rules about how to characterize resources.   There are also ways to re-characterize “excess resources” as permissible income.  A knowledgeable elder law attorney can help a married couple with more than twice the assets of the example in this article to qualify immediately for Medical Assistance.  Similarly, in the case of a single individual, techniques exist which allow an immediate application which will enable the  savings of at least half the assets and avoidance of probate.

While this might be shocking, it is true that no one other than your attorney has a legal duty or self-interest to tell you how you can qualify as soon as possible for Medicaid.   At no step in the process is anyone required to urge a resident of a skilled nursing facility, or their caregiver who assumes responsibility for paying the expenses, that they should obtain independent legal advice.  Nursing homes often offer to “help” with the Medical Assistance paperwork, but such assistance is self-serving.

If such a circumstance occurs which results in DHS’s eventual denial of Medical Assistance application, even if the application is submitted by the nursing home after all of the applicant’s funds have been spent, Pennsylvania’s filial support law allows a nursing home to sue any adult child of the applicant to pay for the care. The adult children’s only defense is if they were abandoned by the applicant for ten years while a minor.    The law intentionally encourages adult children who have equity in their own home to pay attention to their parents’ financial affairs.  Even if a sibling or nursing home seems to taking responsibility, if a problem surfaces later, lack of involvement is not a sure defense.

DHS is not permitted to give legal advice to applicants.   Attempts at self-help usually waste valuable time and often lead to expensive mistakes.  Therefore, if you have a spouse or a parent who is in a skilled nursing facility, you should immediately seek help from a knowledgeable elder law attorney.