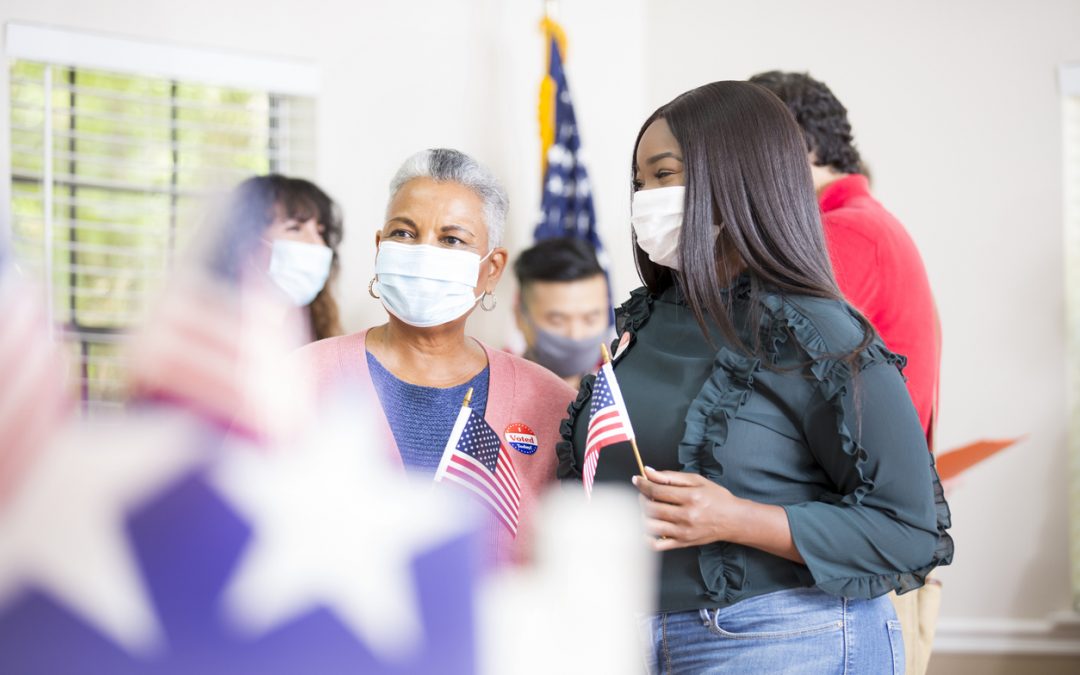 Over the last two decades, persons over the age of 65 have demonstrated by far the greatest rate of participation in voting among all voter age groups.  According to U.S. Census Bureau data, 66.1% of people aged 65 and over voted in the 2018 general election, whereas only 35.6% of people between the ages of 18 and 29 voted.  For people who lived through the Great Depression and World War II, voting is a patriotic duty.  Those who came of age during the Civil Rights Movement and the Vietnam War witnessed the consequences of policy decisions and the power of actively engaged citizens to shape that policy.

There is no reason to expect a decrease in voter participation by older adults.  In addition to the perennial political issues that matter to those who lived through dramatic changes in American culture, there are significant political issues to be solved that weigh especially heavily on older adults.  The government’s response to the coronavirus pandemic is literally a matter of life and death for adults whose age and medical conditions make them more vulnerable to severe complications from the virus.  According to an AARP survey, older voters in Pennsylvania and 10 other states with competitive races for president and U.S. Senate say they are more likely to vote for candidates who promise to protect Social Security benefits and strengthen Medicare.

As older adults lose friends, family members, and the ability to function independently, casting a vote is an act that symbolizes control and individuality.  While there is no doubt that older adults value their right to vote, the ability to vote may be called into question for an increasing percentage of the population.  Between 2000 and 2018, deaths from heart disease rose at a rate of 7.8% while deaths from Alzheimer’s disease grew by 146%.  One in three older adults dies with some form of dementia.  Millions of other Americans are afflicted by ALS (Lou Gehrig’s Disease), multiple sclerosis, or traumatic brain injuries.

When cognitive impairment results from disease or injury, the law imposes certain standards to determine whether a person has the capacity to make important decisions about finances, health care, and living arrangements.  Elder law attorneys routinely counsel clients about the importance of having and updating a durable power of attorney as a way to plan for incapacity.  An advance health care directive enables a person to choose someone they trust to make medical decisions in keeping with the person’s expressed values and wishes.  Without these forms of planning, the time comes for many older adults when the law no longer recognizes their ability to decide what happens with their money and property or to choose where they will live.  At that point, a court must appoint a guardian to make these decisions for the incapacitated adult.

Knowing how important voting is for older generations, many adults and caregivers may wonder if the law imposes a similar cutoff for the capacity to make decisions on a ballot.  Questions arise about whose right it is to say whether a person has the capacity to vote and how much assistance can be provided to the cognitively impaired voter who is filling out a ballot.  Although there are not clear answers to every aspect of this complicated issue, one theme has gained consensus among scholars in the law, medicine, and ethics.  The goal is, to the greatest extent possible, to recognize the dignity and independence of each person.  We do not hold older people or the disabled to a higher standard when it comes to voting than we do for other adults of voting age.

Voting is a fundamental constitutional right.  Federal law in the United States excludes only children under the age of 18 and non-citizens from voting.  The states may further decide the qualifications of voters, but the states may not do so in a way that violates federal discrimination laws.  The trend in this country has always gone in the direction of expanding the list of who may vote.  The 15th Amendment was ratified in 1870 to prohibit states from denying the vote to citizens on the basis of race.  The 19th Amendment, which gave women the right to vote in 1920, followed decades of organizing and lobbying by the likes of Elizabeth Cady Stanton, Lucretia Mott, and Susan B. Anthony.  The effort to expand access to voting continued into the 1960s, when Congress passed the Voting Rights Act to combat the practice of using “literacy tests” to exclude certain voters, particularly black Americans.

Courts across the country have made clear that the voting rights of older people and those with cognitive impairments are just as sacred as those of women, racial minorities, and others who have historically been targeted for discrimination.  Unless a court makes the rare decision to revoke an incapacitated person’s right to vote during a guardianship proceeding, every person may choose to vote regardless of cognitive impairment.  Instead of having a cutoff point after which a judge or government official deprives a cognitively impaired person of the right to vote, the process is driven by the voter’s ability to express his or her choices on the ballot.

If a cognitively impaired person expresses the desire to vote, then his or her ability to do so will determine how the ballot is completed.  In Pennsylvania a person over the age of 65 or anyone with a disability may bring someone to assist the voter at a polling place.  Family members and caregivers often provide assistance to voters with absentee or mail-in ballots.  The goal is to enable the cognitively or physically impaired voter to express his or her wishes to whatever extent the voter is capable of doing so.

Of course, those providing assistance must be cautious about crossing the line between assistance and actually casting votes for the people being helped.  Just as we have a proud national history of expanding ballot access to every adult, there is also a long history in this country of unscrupulous actors trying to influence election results through fraud.  The rule in this country is “one person, one vote,” and criminal penalties await the caregiver who tries to vote twice by manipulating a cognitively impaired voter.

Helpers may assist a cognitively impaired voter by reading the choices on the ballot and marking the voter’s choice.  If the voter is unable to express a choice, that ends the matter and the helper should move on to the next choice.  Any voter may choose to vote for one office, such as President, but not another, such as Senator.  Neither the voter nor the helper should feel obligated to cast a vote for every office on the ballot.  If the voter asks the helper for advice or opinions about the candidates, the best response is that it is the voter’s choice alone that matters.  While a helper may read information about the candidate that is on the ballot, such as the candidate’s party registration, it is inappropriate for the helper to provide background information.  The risk of being selective or biased is simply unavoidable.

Helpers would be wise to ask cognitively impaired friends or family members about voting before the deadlines for voter registration and the completion of absentee or mail-in ballots.  The Pennsylvania Department of State maintains a website full of helpful information at VotesPA.com.  Sharing this information and assisting older voters within the bounds of the law demonstrates our national commitment to giving every person a voice on matters of vital importance.