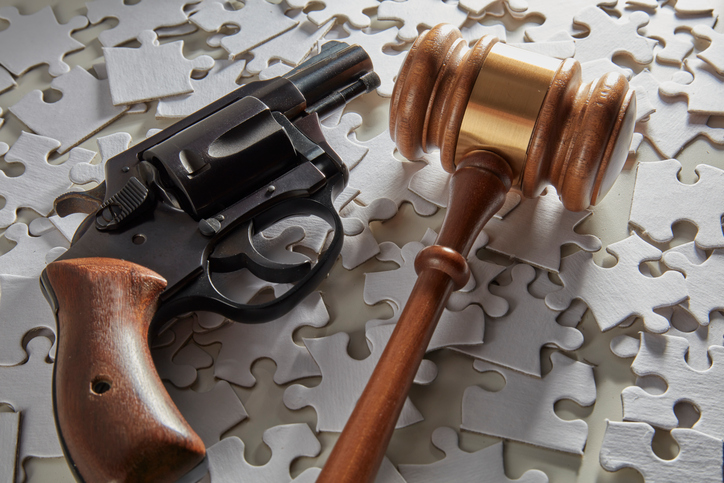 CBS News cited Census data to list Pennsylvania as the eleventh most heavily-armed state, with 88,732 registered firearms among 5,928,814 people.  In launching the Alzheimer’s State Plan Task Force, Governor Wolf said “over 400,000 Pennsylvanians are living with Alzheimer’s disease or a related disorder.”

It is unclear how many households have both a person with a dementia and a gun.   Recent articles published by the Annals of Internal Medicine, Kaiser Heath News and others suggest an inconclusively wide nationwide range of between five percent and sixty percent.

If you have a loved one with dementia who lives in a home environment where a firearm is present, you might consider the increased potential risk of suicide or involuntary manslaughter.

Kaiser’s investigation found over 100 cases nationwide in which people with dementia used guns to kill or injure themselves or others.   Dr. Arthur Przebinda of the group Doctors for Responsible Gun Ownership said that to focus on the potential of people with dementia to commit a gun-related crime is a “bloody shirt-waving tactic that’s used to stir emotions to advance support for a particular policy endpoint. . .  I’m not disputing the case that it happens. I know it can happen . . .  My question is how prevalent it is, because the data is what should be driving our policy discussion, not fear or fear-mongering.”

At least in Pennsylvania, concerned caregivers cannot look to legal regulations to restrict access to firearms by a person with a dementia diagnosis who has no criminal record and who has not been declared to be incapacitated by a court.

The Pennsylvania Senate proposed Bill 501 in March 2017 to deter the use of guns in relation to domestic violence.  Even if it were to pass, and thereby add Pennsylvania to the minority of states which have “red flag laws” to allow authorities to take guns from persons who exhibit dangerous behavior, its language is directed at persons who commit domestic violence or other crimes.  It does not address the issue of gun ownership by persons with dementia.

The Second Amendment of the Constitution protects the right of an American to bear arms.  A significant number of recent reports and studies have discussed whether laws to restrict gun access for individuals with a dementia diagnosis are necessary or would be unconstitutional.

Hawaii and Texas are two states which have laws to restrict weapons for persons with a dementia medical diagnosis, but who have not been declared by the legal system to be incapacitated.  A 2017 article in the Elder Law Journal analyzed whether these states’ laws would survive the scrutiny of a federal court challenge based on the Second Amendment and in light of the Supreme Court’s decision in the case D.C. v Heller.  That article speculated that “a ban on gun possession by (a class of) people with dementia will be deemed to implicate the right to bear arms” because such language would be too broad.  The Supreme Court’s standard of stricter scrutiny allows that guns can be banned from an individual who is “mentally ill.”

If Pennsylvania were to pass a law to restrict access to guns by a person with a medical dementia diagnosis, who would report it and how would it be enforced?   At what stage of dementia does access to guns become dangerous?  Would the Second Amendment rights of a caregiver or family member be compromised?

Driving an automobile is not a Constitutional right.  Pennsylvania laws not only enable but require a physician to report a person to PennDOT who the physician believes is unsafe to drive.   Many physicians neglect to do so.  The penalty for a physician’s failure to report is rarely imposed.   Would it be any different if physicians were required to report persons with dementia? How would they know if the household had a gun?

The Pennsylvania Uniform Firearms Act specifies that it is unlawful for any person who has been determined by a court to be an incapacitated person to possess, use, manufacture, control, sell or transfer firearms. The act requires that an official form be submitted to the State Police within seven days of a court’s adjudication.

Creating a “gun trust” and mentioning the future restriction of guns in an “advance directive,” have been suggested as preventative legal strategies.  Restricting access to guns is not the intended purpose of either document.   In either case, it is hard to imagine how words on paper would deter a person with dementia from attempting to access and use a gun inappropriately.

Persons who live in a household which has both a person with a dementia diagnosis and firearms should consider whether firearms can be unloaded and kept under lock and key.  Even if they are, a gun collection which is plainly visible to a person with dementia could be a temptation that is as frustrating and as hard to resist as is a set of keys to a favorite car.

It could be difficult if not impossible to exert precautionary measures in relation to a gun owner with a dementia diagnosis who is not a member of your household or family.   Police officers may use laws which address disturbing the peace or making terroristic threats to disarm a person with a dementia diagnosis if he or she visibly possesses a firearm in a way that is a threat to self or others.

Service providing organizations might consider the need to ensure safety of those making home visits.  A San Diego nonprofit group, Volunteers with Alzheimer’s, decided to discontinue sending volunteers into households where guns are present.

Access to firearms is one of many issues for a household that is living with a person who has a dementia diagnosis. Common sense suggests that precautionary actions by family members and caregivers are warranted.   The adoption of more state regulations which restrict gun ownership of all persons with dementia, or initiating a guardianship action solely to control access to firearms in a household shared with a loved one, seem to be unnecessary extremes.