Your New Caregiver is… a Robot?? 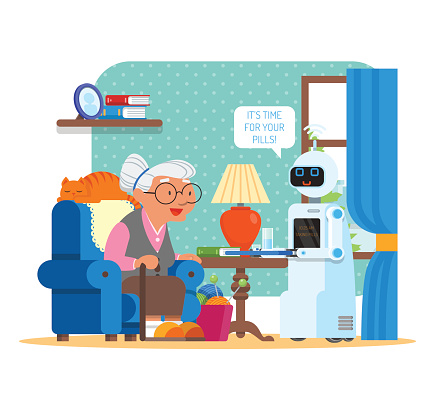 The combination of a growing aging population with increasing care needs, and not enough family members and paid caregivers to meet current demand, has opened the door for technology to help fill the gaps.  As a nurse who has provided care in a variety of settings over many years, I was skeptical of the ability of robots to perform caregiving duties when I initially started to research this article.

Robots are currently available which can perform a variety of household tasks, such as mopping floors, vacuuming, cleaning pools, and even mowing the lawn. Self-driving cars are in the news regularly. Research has been done in the U.S. and Europe to develop robots which can even fold laundry (perception and manipulation of a flexible object like fabric, something humans do without thinking about, is a highly complex task for a robot).

But caregiving involves much more than completion of certain physical tasks.  How could a machine possibly succeed at helping transfer a frail older adult with fragile, paper-thin skin; or manage the variables which influence caregiving situations such as emotions, preferences, and conversation?  How would people react to assistance provided by inanimate equipment?

Technology has made significant progress toward addressing these issues.  Honda has developed a robot which responds to cueing by voice, vision, and touch; and can walk forward or backward, dance, and open a bottle and pour a drink.   A Japanese research institute named Riken is working on its third version of a bear-like robot which can lift a person out of bed or a wheelchair.

There are some caregiving robots already in public use which demonstrate how people react to these machines.  PARO is a therapeutic robot (or “carebot”) which looks like a baby harp seal and has been designed to interact with people to provide the benefits of animal therapy without the drawbacks of live animals (which can be unpredictable, potentially carry disease, and require physical care).  PARO has succeeded in stimulating some individuals with dementia in situations where human interaction alone was ineffective. This technology has been in use in Japan and Europe since 2003, and PARO is the 8th generation of development.  While there may be some ethical questions about leading people (like those with dementia) to believe that PARO is real, as well as the potential for it to be a substitute for human interaction; when used appropriately, it can be a tool to help caregivers instead of replacing them.

An example of a humanoid robot which is in use around the world is Pepper.  Unveiled in Japan in 2014, Pepper stands 4 feet tall, has a pleasant appearance, and is able to recognize human emotion and respond appropriately through movements, voice, and a screen on its chest. Pepper can currently be found “working” in businesses such as Renault dealerships as a concierge, in grocery stores to help shoppers locate products, and performing a variety of tasks in many locations in Japan.  In May of this year, visitors to four of the museums of The Smithsonian were introduced to Pepper, who provides guests with information about exhibits, tells them stories, and poses for selfies.  Pepper can hold a conversation, but is not yet able to understand every statement made by an individual, so sometimes its statements are nonsense.  So far, Pepper has been well received and is succeeding in improving visitor traffic to some less frequented areas of The Smithsonian.

But what about long-term care?  Japan is at the forefront of developing robotic aids to caregiving, due to an even greater disparity between the numbers of caregivers to older adults than exists in the U.S.  According to an article in Reuters, one nursing home in Tokyo, with financial assistance from the government, is currently using twenty different models of robots to assist with caregiving.  Not all of its robots have humanoid characteristics like Pepper, but generally, the robots have improved staff and resident morale.  This home has not yet reduced human working hours or personnel costs.

Technology is performing tasks for us that we would not have imagined less than a decade ago.  It appears that some caregiving tasks are well on the way to robotic assistance as well.  Are you ready to let robots help you?