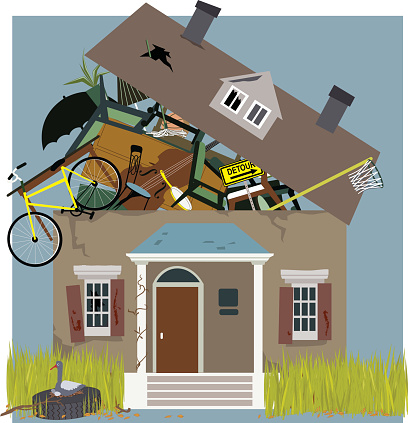 The coming of spring is sometimes associated with the ritual of a thorough housecleaning. Spring cleaning may be connected historically to the Iranians and Chinese, who clean their homes in anticipation of the start of a new year; or to the Jewish culture, in which homes are cleaned prior to the celebration of Passover.  Regardless of where the term originated, the thought of any cleaning, much less spring cleaning, creates extreme emotions for families who have experienced hoarding behaviors by a loved one.

Prior to 2013, when the American Psychiatric Association first listed hoarding disorder as a distinct condition in their Diagnostic and Statistical Manual of Mental Disorders (DSM-5), it was considered to be a symptom or subtype of obsessive compulsive disorder. The first widely accepted definition of hoarding was developed in 1996 by Professor Randy Frost of Smith College, working with Tamara Hartl.  They proposed three characteristics of hoarding: “(1) the acquisition of, and failure to discard a large number of possessions that appear to be useless or of limited value; (2) living spaces sufficiently cluttered so as to preclude activities for which those spaces were designed; and (3) significant distress or impairment in functioning caused by the hoarding.”

The possessions involved in hoarding are commonly referred to as clutter. How does one know when the amount of clutter progresses from a general accumulation to hoarding?  Cluttergone, a company in the UK which provides decluttering and organization services, defines what they call “The three C’s – Clutter, Clots, and Clogs.”  Clutter is considered a general disorganization of belongings.  These belongings are being used, but not put away afterward.  “Clots” are piles of belongings which don’t move for six months or more, and hinder the use of spaces within the home.  A suggestion or attempt to move a “clot” can create anxiety for the owner.  “Clots” progress to “clogs” when the piles begin to grow and touch each other, creating difficulties in navigating around the home. “The possessions are no longer being used.  The person is now serving their things rather than the other way around.”  (www.compulsive-hoarding.org).

The accumulation of possessions can occur in several ways. While compulsive shopping is one culprit, some hoarders acquire only free items, and still others may resort to stealing. Other hoarders don’t necessarily acquire excessive amounts of new items, but instead don’t throw anything away, resulting in excessive amounts of trash, such as containers and packaging. Another variation of hoarding includes the acquisition of animals instead of objects.  These individuals have a need to acquire and control the animals, which preempts the needs of the animals themselves.

Why do these behaviors occur? The Mayo Clinic lists several risk factors:

How do professionals diagnose hoarding disorder? The DSM-5 referred to earlier lists the following criteria:

Hoarding is a complex disorder which continues to require research in order to understand its triggers, behaviors, and potential treatments. Older adults are at risk for hoarding disorder due to the greater likelihood that they are experiencing social isolation or have experienced a stressful life event.  Next week’s column will discuss how to address hoarding behaviors.