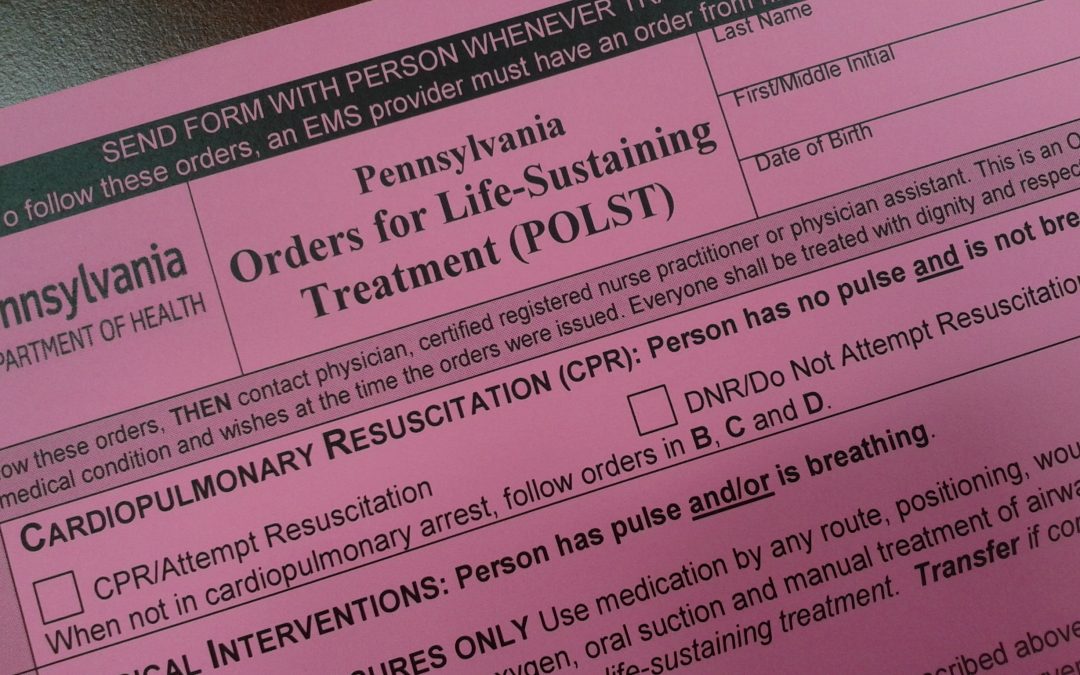 Last week’s column discussed Advance Care Directives for end stage medical treatment https://keystoneelderlaw.com/end-of-life/advance-care-directive-promotes-free-will/.  The Directive prepares for the possibility that a person’s future state of permanent unconsciousness could cause an individual to be unable personally to communicate to the treating physician about the care or treatment he or she would like to receive or not to receive.  It is an important legal document which provides guidance, but not absolute direction, to the treating physicians. The POLST is another document which may be used to share an individual’s specific wishes for care.

For an Advance Care Directive to be used by an agent as the sole expression of the patient’s wishes, a physician must have determined that a state of permanent unconsciousness exists, and must have access to both the document and agent.   Because an Advance Care Directive is only a legal document and does not contain clear direction to medical staff, in most instances, more specific medical direction is needed from the physician.

The Pennsylvania Order for Life Sustaining Treatment (POLST) may be completed by a licensed physician, physician’s assistant or certified registered nurse practitioner.  It is a medical order which can be implemented.   The POLST considers the intentions and wishes as verbalized directly by the patient, or in the case of a patient who can no longer communicate, as expressed previously in the Advance Care Directive and/or by the agent who is given the authority by the Advance Directive.

If no healthcare agent was appointed, or if the healthcare agent is no longer available, the medical team might seek the involvement of a court-appointed guardian of the person to sign the POLST for an incapacitated person.   Since the Pennsylvania statute does not specifically give a guardian the right to sign a POLST for an incapacitated person, both the medical professional who is the POLST preparer and the guardian might be wise to seek the Orphans’ Court approval of a proposed POLST, unless perhaps the guardian of the person has been authorized previously and generally by the court to sign a POLST, or the incapacitated patient previously expressed end-stage wishes clearly in some form of Living Will at a time that incapacity was not an issue.

Unlike an Advance Care Directive, which can vary in format or style if it generally conforms to statutory requirements, a POLST is a specific, fill-in-the-blank, two-sided, one page form which the statute says should be on printed on pink cardstock, and must have original signatures.  The idea is that the POLST will be very noticeable in a patient’s medical file.

Increasingly physicians and facilities have been using POLST on a routine basis, especially when there is some concern that a patient may be nearing the end of life stage.  General guidance suggests that use of a POLST may be appropriate if a physician reasonably believes that a patient could die from chronic illness or frailty within one year.  Discussion of treatment options, including those reflected in an Advance Care Directive, is required with the patient or the agent named by the Directive, and a signature to evidence that discussion is required to be entered on the POLST.

POLST is the primary form, but not the only medical form, to give medical directions for end of life treatment In Pennsylvania.   An out-of-hospital, do-not-resuscitate (DNR) order instructs an Emergency Medical Technician (EMT) not to perform cardiopulmonary resuscitation (CPR) on an individual who is carrying such a paper order or is wearing a prescribed DNR necklace or bracelet.   This DNR process pre-existed the POLST form, and if such a DNR does not exist, the POLST form must be supported by an immediate order to stop an EMT from performing CPR.  Without a DNR or an order from a doctor, once an ambulance has been called, the EMT has a duty to use CPR and other means to stabilize life and get the patient to the emergency room.

Without such an out-of-hospital DNR form, bracelet or necklace, the fact that a DNR was taped to the door of a hospital room does not mean that it can be considered to be a continuing order after a patient is discharged.  Certainly, the Advance Care Directive itself is never a DNR, which is a common misunderstanding among those who say, “I went to my lawyer and got a DNR.”  This can be confusing and upsetting to family members who have been instructed by their frail loved one to “avoid heroics and let me go when the time comes.”

It is difficult for a physician to issue a POLST to withhold treatment if the Advanced Care Directive is not clear, or if multiple family members are equally empowered as agents and the family is not united.   An incompetent patient may reverse a decision made by the principal’s agent that would withhold or withdraw life sustaining treatment by making a semi-coherent statement about wanting to live.

If the family cannot effectively serve as a patient’s advocate, physicians on occasion can seek input from a healthcare facility’s ethics committee.  Such a committee could include the physician, nursing staff, a pastor or chaplain, and a lawyer.  An ethics committee can meet on short notice to resolve ambiguity, but a decision to withhold treatment ultimately requires an agent’s consent, if not proactive advocacy.

Life or death decisions are not easy, but advance discussion and planning is useful, if not required, to avoid emotional turmoil and family dissension.  You, as a principal, should begin now by getting help from an experienced lawyer to counsel you and your agent in the preparation of an Advance Care Directive.  Your family’s understanding of your wishes will facilitate a physician’s eventual ability to give directions with a POLST or to issue a DNR when it has been determined that the quality of your life has ended irreversibly.